Coral Bay was brilliant we and left thinking that it was one of our favorite places on the trip. A small coastal village atmosphere and the most turquoise blue waters with amazing snorkeling straight off the beach. Coral Bay is definitely going to be hard to beat…

We headed up the peninsula following the reef, through Ningaloo Station and then the Defence Land. Driving just behind the dunes, there were many spots we were temped to pull over and set up camp. But being Defence Land, with no camping permitted and the fact that it was an Air Weapons Test Range we decided we’d push on into the Cape Range National Park.

We found a great little spot called Boat Harbour, with a natural rock wall protecting a little bay. Coming in late in the day it looked idyllic with the sun setting on the water in this peaceful little bay. Early the next morning was a different story though! The campsites are set behind the dunes and with a Nor-Easter blowing there was no protection and we almost took off in the rooftop tent! The wind didn’t ease until the afternoon, so we spent the day down on the beach sheltering close to the dunes and doing some fishing. As the wind eased we did some snorkeling and swimming in the bay. We even had a couple of shovel nosed sharks that were our constant companions in the shallows of the bay! 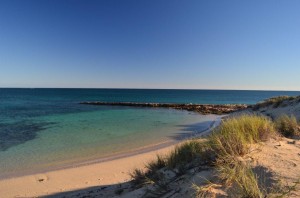 We met a great family who were from Victoria and were planning on staying there 3 weeks with their kids. They headed into Exmouth for the Whale Shark Festival and even offered to buy some supplies for us. We returned favor by giving them some of the kid friendly movies we had on our hard drive to keep the kids entertained for a while. Everyone we have met on the road has been really nice and it definitely restores your faith when people are so friendly and generous.

From there we headed further up into the National Park and crossed Yardie Creek, which the crossing was disappointingly dry. To our surprise the road was sealed from here up and filled with caravans and 2wd cars. We find ourselves averse to crowds now so decided not to stay another night in the park seeing as all the campsites were packed out. Instead we spent the arvo snorkeling at Turquoise Bay, reputedly the best snorkeling spot in the park, and it didn’t disappoint. The reef access is right off the beach and kept us amused for hours. A pair of dolphins even came in for a look around! 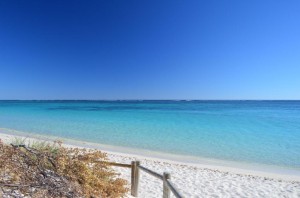 After Coral Bay, Exmouth didn’t quite match up. It seems like more of a working port town than a tourist one so we spent only a night there to stock up before we headed inland for our next section. We spent the night at at Caravan Park and washed off the salt of the last few days and left feeling refreshed and excited about the next section of our journey into the Pilbara.

Dave already added the photos for this section to Coral Coast so jump into that album if you’d like a refresher.