First port of call after Karijini was Port Headland which houses the port operations for BHP Billiton so naturally there is lots of big infrastructure around the place. All the ore gets transported here by rail and then is loaded onto the freight liners and sets sail for China. We were expecting a hive of activity but it was the public holiday Monday and the place was deserted. All but the poor suckers on the roster for BHP that day were out elsewhere. Headland wasn’t all that flash, so we took in the sights of the working port and then hit the road.

We pulled up camp for the night at a roadside rest stop on the DeGreys River which had been recommended to us from the couple with the Conqueror who we met at Mt Robinson. Funnily enough we saw them there later on that same day! This was one of the best free roadside stops we have stayed at, there are many places to camp along the rivers edge and we managed to find a nook for ourselves, despite the fact that there were many people already set up. We met a really nice couple from Perth, Andy and Ashley, who are travelling for a year round Aus. They invited us to join them by the fire after dinner and we sat round trading stories about our travels and places we went to see. Ashley is from Calgary and it turns out they got married in Narramatta in the Oakanagan, BC which is where I went with Fizz and Duncs!

We headed out early the next day with Broome in mind as a destination. We stopped on the way at 80 Mile Beach, but it was windy and full of nomads with fishing rods every couple of metres down the beach so we kept heading north. Just before Broome we saw a turn off to a station and randomly decided to pull in for a night. Barn Hill is a working cattle station with caravan and camping facilities on the beach as a side business. We thought that it would be empty but to our surprise it was pretty full! Turns out Barn Hill really caters for the grey nomads, with a bowling green, morning tai chi daily, stitch-n-bitch sessions (arts and crafts), BBQs and other social gatherings. People have been coming for up to 5 months a year for the past 20 years and apparently its quite cliquey… although we are too young to be caught up in any of it and feel like we’ve stepped into the twilight zone!

Barn Hill has its own beach front with red dunes and white sands which meet the azure Indian Ocean. However they recently had a cyclone up here and it took away loads of sand from the beach and exposed a lot of rock. It was interesting exploring the rocks as their was all sorts of curiosities snagged up in the rocks. We saw a marker for a pearl lease, a rusted gas bottle and lead, shipping buoys and other flotsam which had been washed up. Dave tried his hand at beach fishing and I took some time to laze on the beach and read my book. Fisheries came in and did a presentation on WA’s fishing rules to all the nomads. We chimed in for the free BBQ at the end and hoped to learn a thing or two about catching the elusive fish. The fishing rules here are quite contradictory and it ended up as a bit of a lynch mob mentality… it appears best not to get between a nomad and their fish!

We didn’t make it back to the office in time to get a power lead long enough for the ridiculous power boxes, so we quickly made friends with our neighbours and piggybacked of their supply. Turns out Alastair and June are really lovely people who have travelled at lot around Australia and have been to almost everywhere we are planning on going. So we pumped them for information and have got some great tips about places to stay etc. They also were kind enough to show us through their Kimberley Karavan, which is the ultimate off road caravan built to go anywhere with all the mod cons. We were left green with envy and wondering how we could come up with the cash to buy one of these babies, which are $110,000 new…. think we’ll be saving for quite sometime before that happens!!!!!!!!

Next stop for us was Brome which was only 150kms up the road. We headed to Tarangau Caravan Park which was near Cable Beach. The place was small and well maintained and we spent two nights there. Our mate Steve used to live here piloting charter flights out to the islands (what a hard life!) and gave us some pointers on the place. He suggested we take a drive down to the Port and then take the dirt track up to Gantheaume Point. On the way we stopped off and climbed down some rather dramatic red earth cliffs which capped off with sandstone at the waters edge. The combination with the turquoise ocean was simply stunning. We explored the rocks more at Gantheaume Point but unfortunately didn’t get to see the Dinosaur footprints in the rocks, as the tide was too high. We also took a drive along the beach at got away from the crowds at Cable Beach and soak up some sun. 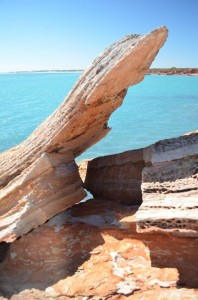 We also caught up on some of lifes little luxuries whilst in town. Watching the sunset over the Indian Ocean at Zander’s on Cable Beach while Dave enjoyed his long awaited seafood platter. I had some much craved for greens, my Thai beef salad was delicious and all washed down with a cocktail! We also took in a movie at Sun Pictures which is the oldest operating outdoor cinema in the world. It opened in 1916 and has been operating ever since. It’s quite something to sit in a deck chair with the stars overhead, geckos crawling on screen and the occasional plane roaring in to land. The airport is literally next door so the planes are seriously loud and low!! 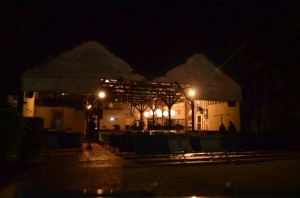 All in all Broome is a lovely town with a rich history thanks to the Pearl Farming Industry. It’s town centre is quite multicultural stemming back to the era of Chinese and Japanese pearl workers. We enjoyed our stay here and would definitely come back here again. The winter time temperatures are perfect for a sunny beach getaway (hint hint Sydneysiders!). Before we left town we dropped in at the local markets in the grounds of the Courthouse. It was lovely to wander round the stalls and mingle with the locals. Mostly artwork, jewellery, clothing and food stalls but we are restricted by room so only bought some postcards. It was interesting to walk the grounds and see the building where they hold the defendants and then the gaol is right across the road, so they don’t have to go far if convicted!!!

One thought on “Port Headland to Broome”