We spent the last two weeks traveling across The Kimberley in the north west corner of the country, along the famous Gibb River Road (GRR). We’ve seen a LOT of “stuff” over the two weeks so we’re having trouble figuring out how to cram it all into a single page, but we’ll do our best to summarize without boring you to death with a million words…

First stop after leaving Broome was a free stop at the Willare Bridge on the banks of the Fitzroy River which also marked our official entry into croc country as there were “freshies” littered along the bank. We’d driven a long way to see crocs in the wild so it was quite an exciting time for us both, however for Tara especially given her life long fascination with them.

The following morning I retrieved my fishing rod from the bank of the river where I’d thrown it and ran after a snake paid me a visit while I was trying to catch my first “Barra” (and a few stern words from Tee about no more night fishing!). We packed up and head for Derby to stock up on food, booze and fuel for our couple of weeks off the grid. We were stuck with mid strength beer and no wine due to the special alcohol restrictions they have in the area. While in Derby we also had a look at the old gaol to catch up on some of the confronting aboriginal history of the area, in particular the story of a bloke called Jandamarra.

Our next stops of Windjana Gorge and Tunnel creek also filled in a little more of the story of Jandamarra, however also showed us an introduction to the unique landscape of the gorges of the Kimberley. Windjana Gorge was spectacular and also allowed us to get within a couple of meters of (harmless) freshwater crocs. Tunnel Creek is a kilometer long tunnel that the creek has made straight through the rock. Pitch black, wading through water which has crocs and snakes in it…it definitely got the adrenaline pumping but we made it out the other end and back without issue. We had actually seen a HUGE snake on the road on the way down to Tunnel Creek so we were already jumpy! 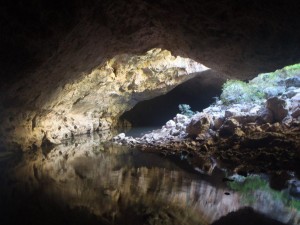 We then went on to Mt Hart Station to camp, visited Lennard Gorge, camped at the Silent Grove DEC campsite and then hiked into Bell Gorge. Bell Gorge was amazing and we spent a while there swimming under the waterfall and hanging out in the sun before hiking back to the car and heading for what was probably our favorite of all the stations we stayed at along the GRR at Charnley River. Charnley River was well setup with good facilities, firewood provided etc and had a few different hikes and gorges of its own that we could go and explore. The first one we visited was called Donkey Hole where I found a nice rock to jump off and even convinced Tee to partake in the fun! The next day we did their hike up to Lillie Pool and Grevellia Gorge where we followed our way down the river and scaled the rock faces down through the waterfalls to the pool at the bottom. Loads of fun and very adventurous! 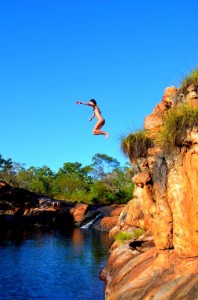 The (roughly) halfway point along the GRR is represented by the Mt Barnett Roadhouse where we topped up a bit of diesel at $2.05 per litre. Luckily the Prado even with all the mods is still getting about 1300km from a tank so we didn’t need too much. The roadhouse is also the start point for the Manning Gorge walk, which actually starts as a swim across a waterhole, they have foam boxes which everyone strips off all their clothes and floats them across the river so they’re dry to put on again at the other side. Yet another snake sighting on the hike on the way to the gorge! No photos of this one…he looked dangerous so we got out of there quick smart! The Manning Gorge was stunning and well worth the hike in. We again swam under waterfalls and hung out on the rocks in the sun.

We then had free camping at a great spot on the Hann River. Probably the only free camping we did across the Gibb. There are places to stay for free if you really wanted but we found ourselves staying on stations most of the time. We then head into Ellenbrae Station and had their famous scones which we were pretty excited about. The homestead at Ellenbrae was quite lovely, green and tropical and the campsite was really old school bush camping with a donkey heater (woodchip) shower in hand built stone wall cottage. Pretty cool. The swimming hole reminded us more of a crocodile infested brown swamp though so we stayed out of the water here!

Getting towards the Eastern end of the GRR towards the Pentecost River we found a hill where we got reception and spent some time ringing around to organize for our front windscreen to be replaced, as a road train chip has slowly but surely turned into a massive crack right across the windscreen. The Eastern end also marks some of the much bigger and well known areas of the Kimberley, such as Home Valley (where the movie Australia was filmed) and El Questro station. While at Home Valley we met two great girls, Bec and Briony, who we ended up sharing a campfire with them that night. Bec told us about the private campsites at El Questro and we made a deal that we’d share one if either of us could get one. We were successful in getting a site in the bush along the banks of Pentecost (the only way to do El Q) and spent the next couple of nights with the girls and Bec’s awesome dog Manic.

We spent our time exploring many of El Questros attractions such as Amalia Gorge, Emma Gorge and 4WD tracks to Pigeon Hole on the Chamberlain River and Saddleback Ridge at sunset where we were witness to a proposal (she said yes for the record!) Zebedee Springs are thermal springs which flow into pools set at the base of Livingston palms and pandanus. It closes at 12 noon for “ecological reasons” which really means that the rich dudes staying in the expensive part can enjoy it without the plebs! 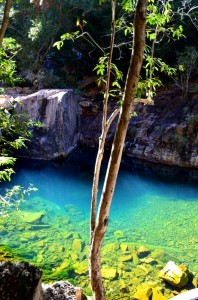 Bec had some fascinating information about the area and the people as she’s been living in nearby Wyndham for a couple of years doing youth work with the local kids and Briony was up visiting her from Melbourne. We eventually finished our Gibb River Road journey and hit the sealed road again and into Wyndham to see the area Bec had told us so much about. We then made a backroads shortcut along the Ord River from Wyndham to Kununurra and are now sitting in a cafe waiting for our windscreen to be fixed! 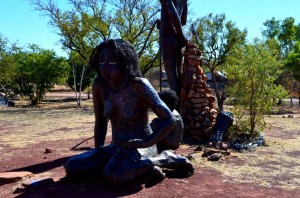 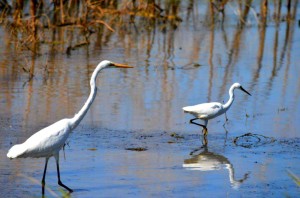 We’ve added photos to a page specifically for The Kimberley, I hope you enjoy as we certainly have loved the area!

5 thoughts on “The Kimberley”