Mum and Dad made their long awaited arrival in Darwin and bought with them a souvenir from Sydney – a cold! Something that seemed quite out of place in 30 degree Darwin. But they were determined to push on and we thought a bottle of bubbles while watching the sunset on Mindil Beach was in order. No markets this time round but some colorful locals added to the experience! Mum and Dad put us up in a beautiful apartment which was a far cry from our usual camping style and had my most missed piece of furniture – couches! 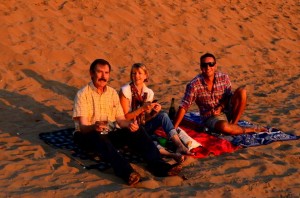 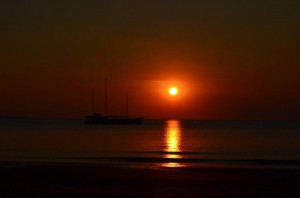 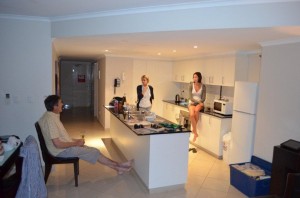 With limited time we took in the sights of Darwin with vigour, which including breakfast by the water followed by a viewing of the Art Gallery and Museum. This was really well curated and included an large display on Cyclone Tracey which ravaged the city in 1974, as well as my particular favourite – a taxidermy crocodile named Sweetheart that measured around 5.5m! We followed that with lunch and a look around the Defence of Darwin Military Museum on East Point Reserve. To say this museum is comprehensive is an understatement. We thoroughly enjoyed learning about the World War 2 from the Darwin perspective. Did you know that whilst Darwin was predominantly bombed on 19th Feb 1942, the bombing continued for another 20 months? This city has certainly endured its fair share of knocks… 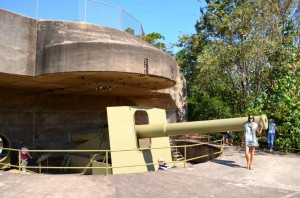 We felt that it would only be fair to get Mum and Dad to experience what our trip is really like and get them to come camping with us. We booked a trailer to take all our gear and free up room in the car and set off with Kakadu in our sights. Day One saw us take in the Mamukala wetlands, Bowali Visitors Centre and the Nourlangie Rock art sites. The artwork was the best and most concentrated works we have seen. We camped at Muirella Park which was small and fairly quiet and we sat around the fire catching up on news from home which was lovely.

The next day was a big one, we headed out to Jim Jim Falls which was access by 4WD only. On the way in a ranger sold us tickets for a boat ride to Twin Falls and we bought them on spec, partially convinced by the .7m river crossing we got to do to get there. At a rest stop Mum made an unplanned deposit in the pit toilet – her prescription sunglasses! This was shortly followed by the deep river crossing where we discovered we were missing a floor plug and subsequently filled the back footwell with water! Not a good start but it got conserably better… The boat ride to Twin Falls was well worth it, the water was crystal clear and the gorge, falls and pools were beautiful. Made better yet by the fact that we had the place to ourselves. Definitely put this on your Kakadu itinerary. Then we cut back to Jim Jim and began the walk to the falls which was quite challenging. Towards the end we were clambering over boulders 2-3m in size and making our way across the flow. Once we reached the pool we went for a dip, despite it being freezing cold! The water here doesn’t get much sun so we thawed out on the rocks before attempting the return journey. That night we camped at Cooinda due to its close proximity to Yellow Waters. It was a really big commercial campsite but served its purpose for cruise booking.

The following morning saw us take in the Yellow Waters wetland by boat at dawn. We sleepily boarded the boat in the dark and watched us the dawn light revealed the wetlands inch by inch. The sunrise was amazing and the waters literally turned golden yellow before our eyes. We saw many of the inhabitants from vast bird species – wistling kites, sea eagles, rufus night herons, jesus birds, egrets, jabirus, kingfishers, wistling ducks etc – to the larger and more dangerous inhabitants, the saltwater crocodiles.

Then we headed down to Gunlom and had a picnic lunch before climbing the steep track to the top of the falls. We had heard good things about Gunlom and were not disappointed. There are a series of pools at the top of the falls, like a natural infinity edge pool looking out over the vast expanse of Kakadu. We sat in the sun, soaking up the view and literally had to tear ourselves away to make the descent. It is certainly one of life’s pleasures to spend an afternoon up there. That night we camped at our favourite Kakadu campsite Kambolgie, a small bush setting with decent fire pits and little furry friends. 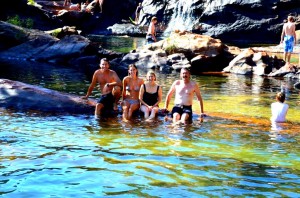 Next morning we hit the road out of Kakadu heading for Litchfield NP. On the way we stopped at Adelaide River and picked up some souvenirs from the craft markets. Our first point call in Litchfield was the Magentic Termite Mounds which angle themselves north to south to maximize the sun exposure. Then we went to Florence Falls for a swim, it was nice here but compared to Kakadu this was busy and we couldn’t even get into Buley Rockholes as it was parked out! It was here we bumped into Ainslie and Will (friends from Sydney!) We also took a drive to Blyth homestead and learnt about the tough life of the pastoral pioneers. It also seemed like the building had been built for midgets when our heads were above the height of the verandah roof! That night we made camp at Sandy Creek which was fairly remote as far as Litchfield goes. During the night we had a group of Dingos howling near the campsite which is always special to hear. 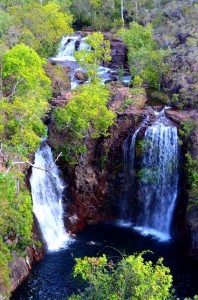 The next morning we took it quite lazily and had bacon and eggs with toast cooked on the fire. By the time we packed down camp it was very warm and we were almost tempted for a swim at Wangi Falls. That was until we got there and saw the hoards of people! Instead we just took some photos and were on our way with ice cream in hand – the luxury of a highly frequented spot. Don’t get me wrong, Litchfield is beautiful but it’s close proximity to Darwin means that it’s frequented by day trippers and the sites are busy. On our travels we have heard many nomads say “Kaka-don’t” but our experiences were to the contrary. The sheer size and scale of Kakadu is peerless and if you have the resources to get out and see it you won’t be disappointed.

On our return to Darwin we stopped off to see the oil storage tunnels that were built during WW2. A relic that was never used for its intended purpose, now forms a makeshift wartime gallery which is worth the look. 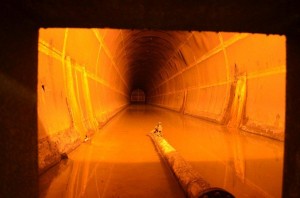 This time we stayed in Cullen Bay near the Marina and had a lazy night in going through photos of our whirlwind trip. In the morning we had a delicious breakfast down by the marina, before touring the Nightcliff area where Dad used to live. It was a sad goodbye at the airport but a fantastic trip, which will live on long in the memories of us all. Thanks for everything M&Dxx

We booked to do a jumping croc cruise on the Adelaide Rive the next morning and enquired about camping nearby. They offered for us to camp on the land next to the boat ramp where the cruise departs. Not one to look a gift horse in the mouth we jumped at the chance and soon found ourselves at a tropical style shack with some rather large crocs for company. In the morning the owner turned up and Dave gave him a hand taking out an old pump, our thanks for letting us stay. The cruise itself was worth it as we got up close and personal with a bunch of crocs, including the famous Brutus from the NT News, my croc bible before the trip! Brutus is 5.5m and is a bit of a battler with teeth missing and only 3 legs after losing one to a shark in his early life. But seeing him centimeters from me I have no doubt he’d eat me in a second! 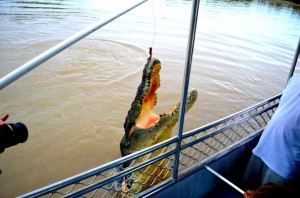 This called time on our Top End adventures and what an awesome time it was. Everything about the NT is wild – from the speed limits to the crazy territorians and the plentiful wildlife – it’s certainly something that should be seen to be believed.

We’ve uploaded the images to the Top End section so enjoy.

4 thoughts on “Clark invasion of the Top End”