We made a beeline south after leaving Darwin and stopped off in Mataranka for the night. We paid a visit to the Bitter Springs where warm crystal clear artesian water flows through a sandy channel surrounded by Pandanus and palms like a little oasis. We slipped into the warm waters and thought if only every long drive could end like this! 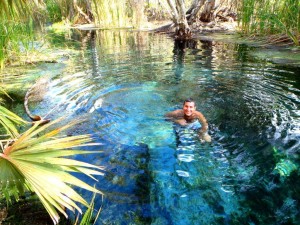 The long drive down was broken by Devils Marbles. Seeing the zillions of grey nomads with caravans already there almost convinced us to keep driving, however we persisted and it was totally worth it. As the sun was setting some hippy dude sat on a marble and played didgeridoo. While I sat soaking it in, Dave took the opportunity to climb as many of the marbles as possible! 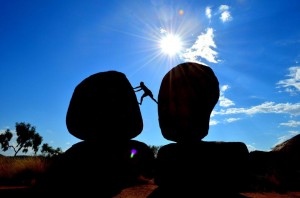 We arrived in Alice Springs to meet up with Fizz who was flying in to join us for a leg. Picking her up at the airport she looked a breath of fresh air compared to us roughened campers. We also happened to time it excellently with the Camel Cup, which is an Alice institution. So we got to experience the uniqueness of camel racing, mix it with the locals and eat heaps of hot cinnamon doughnuts – a winning combo! We were lucky enough to have a bed for the night with our friend Georgie who is living in Alice Springs. We toured some Alice sites such as Anzac Hill and the Old Telegraph Station before having a BBQ at her place with the random collection of people who happened to be in Alice that day. Including Georgie’s mum Cynthia, Jenny and Don Bonnitcha and Georgie’s friend Matt, a recently relocated pilot. 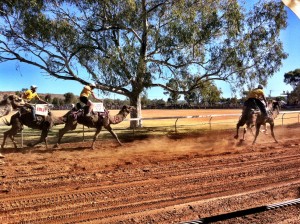 Leaving Alice we headed out to the West MacDonnell Ranges, stopping at the sites along the way. We then found a great bush camp at “2 mile” in the Finke River. Instructions were to camp anywhere in the dry river bed, which seems totally foreign to anything we’ve ever been taught but I suppose it doesn’t flow often out here… It was a perfect start to our camping adventure in a scenic location with a nice warming fire.

Campfire in the Finke River

We then headed for Palm Valley in Finke Gorge NP and on the way stumbled upon the artist Albert Namajitra’s old house. After that we stopped at the old mission at Hermannsburg which was very interesting to learn about the history of the site. We took advantage of the tea house facilities and had Devonshire Tea with Scones – quite fancy considering how remote we were! We continued on down a 4wd track to Palm Valley, where lush palms line the gorge. Dave loved the challenging track through Cycad Gorge and got to test out the Prado. 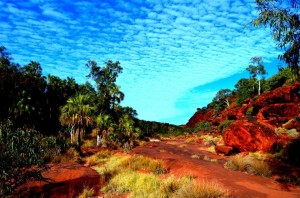 We hit the road heading for Kings Canyon and en route we saw many wild horses and burnt out cars on the Aboriginal Land – very iconic. The campground at Kings Canyon was our most expensive of the trip – almost $60 to camp on a patch of dirt for the night, but it did have hot showers. It’s commercially run and they even had a bar at the sunset viewing platform, which got so packed we left before sunset had finished! Not our idea of enjoying nature… 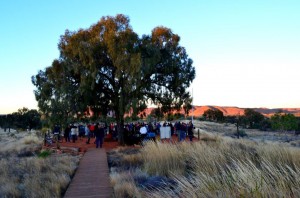 The sunset viewing platform!?! How bizzare…

The next morning we did the amazing Rim Walk at Kings Canyon which is a 6km loop around the top of the canyon. The climb at the beginning was tough, but it was totally worth it once you are up there! The sheer cliffs combined with the sandstone domes are spectacularly beautiful. En route to Uluru we discovered Mt Conner which is often mistaken for Uluru, earning the nickname “Fooluru”! 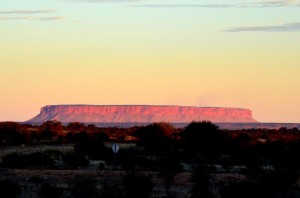 Nothing can quite prepare you for seeing Uluru, despite the many images we’ve seen of it you have no idea how big it really is. You get glimpses driving in then suddenly the road turns to face it and it fills the entire windscreen and you’re still 30kms away! We were lucky enough to get a helicopter flight out to the rock and seeing it from the air is something else. None of us had been in a chopper before so this was definitely a highlight! Getting up close to the rock you feel like a tiny ant. We did a walk at the base and learnt about the aboriginal significance of the site before taking in the sunset. It is so beautiful and surreal that it feels fake. 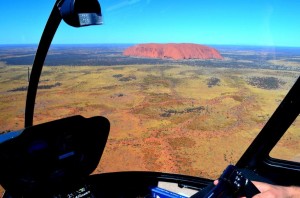 After our Camel Cup experience we were keen to take a camel ride and we happened to be the only 3 in our session so had a private tour with “Rossco” our cameleer! Wandering the sand dunes with Uluru and The Olgas in the background was truly special. The camels were well behaved and Dave even had the pleasure of riding on an ex Camel Cup Winner called Jack! After our camel riding experience we drove out to The Olgas where we did the Valley of the Winds Walk and not surprisingly it was freezing cold and windy! Again these monstrosities seem almost surreal! 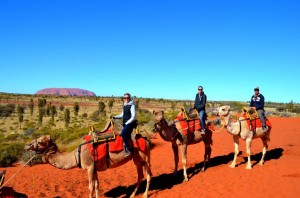 We stayed at a dud roadhouse deceptively called “Desert Oaks Resort” and it was seriously cold over night. We woke to ice crystals lining the roof of the tent where our condensation had frozen! Hot pancakes and maple syrup at Henbury Meteorite Craters soothed the tummy but the wind was still frosty so we took off towards our lunch spot at Rainbow Valley, where the sandstone layers have been eroded to form colourful striped cliff faces. 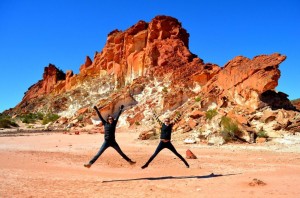 Owen Springs (a former cattle station) was the perfect spot for our last night under canvas with Fizz. Bush camping is allowed anywhere along a 5km stretch in Lawrence Gorge, so we found a nice private campsite in the river bank where we had a big bonfire and celebrated with drinks and music to toast a wonderful stay. 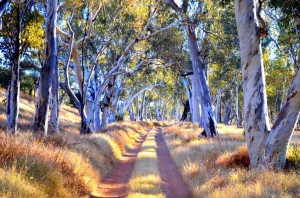 2 thoughts on “The Red (and rather green) Centre”