From a satellite phone call in the middle of the Simpson Desert to the delivery in Birsdville, our brand new shocks took just over 24 hours to get to us. Big thanks to JC, our brilliant ground crew for sorting that out. As luck would have it, the shocks made overnight freight to Brisbane and made the connection with the mail plane to deliver Birdsville the next morning. Dave set about installing them and within half an hour we were fully functioning again. Just in time too as there’s not much to do in Birdsville with a broken car…

Fixing the broken shock in Birdsville

Next on the itinerary was the famous outback town of Innamincka. On the way we took in some outback ruins and the amazing stone woolshed at Cordillo Downs station. This was interspersed with some seriously rocky roads, but I suppose it was part of the Sturt Stony Desert! We passed many motorbike riders who were part of a big bike rally to Birdsville. They were seriously hating the road conditions but had to follow it for their remote fuel stops. That night we found a great campsite on the river just before Innamincka township. Individual camps set on the bank with beautiful river gums and flocks of birds everywhere.

We were in Explorers country and went to look at the fabled “Dig Tree” from the ill-fated Burke and Wills expedition to the gulf. A cruel twist of fate saw the support crew leave the site some 9hrs before the explorers returned. Although fearing them dead, the crew buried rations with the instructions to DIG carved into the tree above the rations. Unfortunately the Dig letters have all but disappeared but the date carvings and a portrait of Burke still remain. We also saw the site of Burkes Grave on the banks of the Darling. Surprisingly all the information displays were pretty scathing of Burke’s character and leadership style. 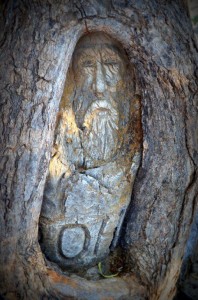 There’s not much to report on Innamincka itself other than a pub, service station and a National Parks Office. So we set off down the old Strezlecki track heading for Cameron Corner. The roads were good and we drove past gas and oil fields out in the desert with the derricks going. Who knew there were so many of these out here? We also came across the famous double decker bus, which was abandoned here when it broke down some years ago. It’s now an iconic stop along the track and seems incredible someone made it that far! At the base for the bus we found some of the enduro bike riders trying to fix a tyre. We were able to return the good karma and used our compressor to get them on their way again.

Cameron Corner is the border of NSW, QLD and SA and also the intersection of the Dog Fence. Its designed to keep the dingos out of the sheep country to the south. Inspired by the Olympics, we decided to have a game of lawn bowls alongside the Dog Fence with some paddy melons growing there. I am pleased to announce Dave as the winner and as such earned himself an ice cream from corner store and probably a few strange looks from the publican, but he had no teeth so what does it matter! 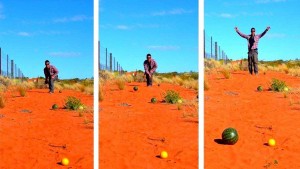 Crossing through the dog fence into our home state for the first time in 4 months we were excited, despite the fact we were still miles from home! We also saw more wildlife in that first 20 mins than we had seen in the whole trip! Kangaroos, emus, feral cats, wedge-tailed eagles, lizards – you name it they were all there in large numbers. Stopped by dog fence, they must have been hanging around considering their options! We rolled into Tiboburra and booked a motel after weeks in the desert we were keen for a shower and proper bed. We even had roast dinner at the pub and felt completely refreshed! 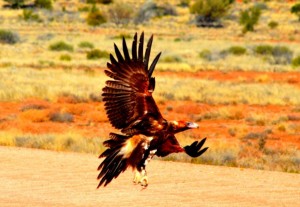 Next we came across the historic gold mining town of Milparinka which is all but completely abandoned. Only a few original buildings remain, with the rest pulled down after the goldfields closed. It was a nice place to stop for lunch before we headed further south to Mutawinji National Park. A great little find, we spent 2 night here recuperating and relaxing. There were some aboriginal art sites and various gorges to look at, but we hardly scratched the surface, favouring our chairs and good books.

We also stopped in at the tiny town of Tilpa on the Darling River. It had a quirky pub where we had a cleanser before asking for directions to the weir, as there was free camping there. We were advised to keep well clear of the weir as the river was rising due to rains upstream. Luckily we didn’t get flooded out, but gale force winds, large trees and canvas tents don’t make a good mix. So a 3am drive was required to get into open ground so we could sleep without worry of a branch dropping on us! After a rough night we were happy to head towards Cobar for a rendezvous with the Robbos! 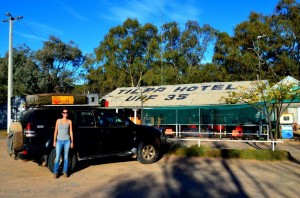