After a quick breaky of Bill’s “worlds best eggs” we bid farewell to Bill and his boys and headed for the Great Ocean Road. Along the way we’re to follow the coastline of the Mornington Peninsula along through some great little towns such as Mount Martha and Dromana and found kilometres of colourful little beach huts. Some were for sale so curiously we looked them up and they range from about $85k to $200k each. Some of the houses around here are absolute mansions on acres and beach front so I can only imagine how much they sell for.

We followed the coastline down to Sorrento and got the recommended and apparently famous vanilla slice from the little bakery in town, before embarking on the car ferry from Sorrento to Queenscliff and even saw a seal frolicking in the water on the way across. A quick stop near Geelong to stock up on food and fuel and we then headed down to Torquay and Bells Beach to watch some surfers get hammered by the power of Bass Straight before heading up to our freebie camp ground in the back end of the forest at Hammond Road Campground.

Leaving there in the morning, we made our way onto the Great Ocean Road (GOR) and learnt a little history along the way about how the road was an RSL project after the war to give the returned soldiers something to do after World War One (OK so I summarised a whole heap of important info into a single sentence, but you all know how to use Google). The GOR was nothing like what I was expecting. I think most of the pics I’ve seen are all around either Bells Beach or the 12 apostles, where it’s pretty much sheer cliff down to really rugged shipwreck coastline, however the major part of the GOR is sleepy little surf towns on quite calm little beaches with people sipping lattes at coffee shops and reading a paper. There are also a bunch of walks to waterfalls etc that are nice little detours along the way. I think to drive from one end to the other is about 3.5hrs but you really need a few days to get the whole experience. We slowly wound our way through the little towns stopping here and there and eventually got to our turn-off towards the Cape Otway lighthouse which led us down a road I’ve now named Koala Alley as there were literally hundreds of fluffy little Koala’s just chillin out in the trees.

We got loads of photos of the Koalas and continued onto our camp site at Blanket Bay, which Tee had picked out of one of our books because it said something about needing to pay for the site during peak periods and sites get allocated by way of a ballot due to the limited space but demand for the spot over summer. We arrived and weren’t disappointed as it was well set-up, completely free given it’s not peak period and we were pretty much the only ones there. We  found our spot just 10 meters from the beach and set-up home for the night, with the table overlooking the beach for dinner and a glass of wine.

We’d had some on and off rain over the last couple of days and overnight it had been bucketing down so camp was starting to get pretty wet and cold. After our morning fishing trip we ran into a Park Ranger who warned of the storm that was closing in for the next couple of days and included hail, so while we loved Blanket Bay and were thinking of staying a second night, we decided the smartest option was to pack up camp quickly and hit the road. This turned out to be a very smart move as the rest of the drive along the GOR was extremely cold and windy so the 12 apostles end of the trip we did really quickly and kept driving, with no real plan. While driving, Tee did some reseach on cabins at holiday parks etc and all seemed fairly pricy so we continued onto Warrnambool and then headed inland making our way for Bendigo for our next stop to see my sister and her family. Tee wanted to check out Daylesford (the one from the Tourism Victoria ad – marketing at it’s best!) and she found a great deal on a cottage just nearby at Hepburn Springs with a fireplace, spa, kitchen etc so we stopped there for a couple of nights to stay dry and warm and did a bit of local exploring of the town. 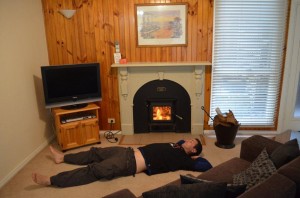 Dave getting warmed up in front of the fire

From Hepburn Springs we’re heading up to Bendigo to see the Bakers.

One thought on “The Great (and wet) Ocean Road”