Our last port of call in WA was Lake Argyle and like the rest of WA it didn’t disappoint. Lake Argyle is a man made lake which was created to provide permanent water for the East Kimberley shire. A dam was built over 2 dry seasons stemming the flow of the Ord River. The cattle station which was flooded was Argyle Downs, hence the name for the dam. The homestead was recovered was and later reconstructed as a museum about the Durack family who were early pioneers of the area and the construction of the dam. The dam is absolutely stunning with the red cliffs dropping down into the blue lake with 9 time the volume of Sydney Harbour!

We left Lake Argyle and hopped the border into NT, which was uneventful after our previous run ins with fresh fruit and veg. There wasn’t even a guard checking cars going into the NT! Just after we crossed the border we passed a sign saying welcome to NT and advising the maximum speed limit is 110km/h. Shortly after that we passed an actual road sign indicating 130! Somewhat contradictory but who were we to argue? Dave put his foot to the floor and put the prado through its paces – which of course he hated!

We stopped in at Keep River National Parkjust over the border and did a busk walk to check out the mini bungle bungles. These sandstone domes are smaller and not quite as rounded, but seeing as we weren’t going to make it down to the real ones these would have to do. That night we camped on the Victoria River near Timber Creek but unfortunately no croc sightings to report. We checked out the memorial to the Nackeroos, an army unit stationed here during World War 2 to guard the coast line and run surveillance on enemy forces. It must have been incredibly tough to patrol this country on horseback and most of their time was spent trying to survive the the conditions. One of the soldiers wrote a poem about the conditions which sums it up pretty well… 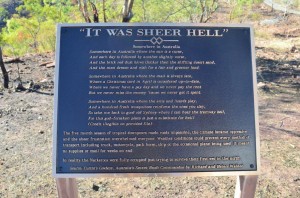 It was sheer hell

We arrived in Katherine and headed straight out to Katherine Gorge which is now referred to as Nitmiluk. The gorge and camping area is run by local Aboriginal people and it seems well set up. We booked to stay 2 nights and a breakfast cruise up the gorge for the following morning. We set up the full fiasco with our gear seeing as we weren’t driving anywhere and even got the sides of the foxwing going for some privacy. Then we set about relaxing by the resort-style pool and reading our books like we were on some kind of holiday! 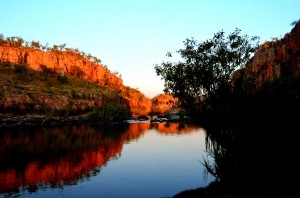 Waking up for our cruise was hard as we’d just lost an hour and half in time zone change so 6am was like 4:30am for our body clocks! But it was worth it. When we boarded the boat the sky was just turning a soft shade of pink in the breaking dawn and we enjoyed our hot breakfast whilst cruising on the glassy waters of the first gorge. Katherine Gorge is made up of 13 gorges which are separated by rocks, rapids or falls. So when we reached the end of the gorge we hopped off the boat and took in an Aboriginal art site while waking to the second boat.

The taller of the art works depicted Mimi’s which are mythical creation beings. They are tall and skinny and have 7 fingers and toes. The Mimi artwork was very high, and folk law says that it is because the Mimis painted it. Science says its possible that their was a rock shelf that could have held humans that’s since possibly fallen away… The Mimi’s protect the local aboriginal people and if they were to bring someone from another area into their land they would wipe the sweat from their underarm on the guests forehead so the Mimi would recognise the scent and protect them too. Nifty idea but doesn’t sound too pleasant!

The second gorge we sat on a smaller boat with forward facing seats and went already up the next gorge. This section of the gorge is famous and has starred in a number of movies. For the oldies who may have seen Jedda’s Rock, the scene where they jump off the cliff was filmed here. But unfortunately the footage was lost in a plane crash and without budget to reshoot on location, a cliff face in the blue mountains was substituted, which is why the cliff turns from red to grey in the movie! For the younger ones, the film Rogue about a giant crocodile attacking a tour boat was also shot here. 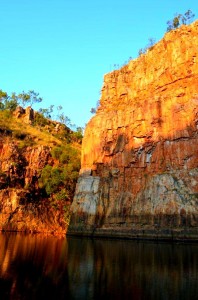 Leaving Katherine and heading for Darwin we passed an awesome sign on the railway bridge declaring “Jesus loves nachos” which we found hilarious. But that was short lived as 500m down the road we passed through a police roadblock looking for the fugitive accused of beheading a man. Police were armed with pump action shot guns and assault rifles and were stopping incoming traffic from Darwin and searching all cars, caravans and trailers. Was very sobering to see and suddenly we felt like we might be heading into trouble!

We managed to time our visit to Darwin to coincide with Territory Day which celebrates their foundation. Being the Territory and its kinda wild up here, it also means that any one can buy and set off fireworks! There were errant crackers going off everywhere and no doubt many injuries and lost dogs after all that commotion. Needless to say the Mindil Markets were absolutely packed but it was worth it. The Mindil Markets are a Darwin institution with clothes, art and crafts, jewellery etc. as well as multicultural food stalls and live music. Our real reason for coming was to get Dave a didgeridoo and we didn’t leave empty handed. Our only problem now is how to fit the bloody thing in the car with everything else!!!

For pictures check out the Top End gallery.